The function of this wt2 really surprised me! It is fast and accurate, and I am very satisfied with these two points. I have tried French and Korean friends. They all say that it is too smart ^_^! I am using it when I am going abroad for a trip. It seems that it is fully qualified for this job! I bought a translator before, wt2 has easily replaced it ^_^! I also like this wt2 charging method, it is very durable! And it's very simple to operate, in short, like it! 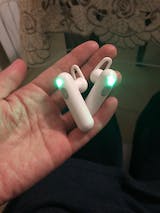 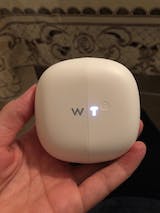 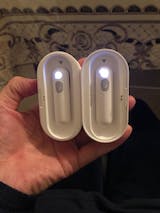 First, let me say this is the best translator I have used. Given that, there are some areas that were a bit confusing when I first received the WT2 Plus translator. First, the earbuds wanted to upgrade right away, and one failed the upgrade. It was probably due to low charge. I reset the App and tried again, with success. Once connected the three modes worked as described. The translation (Brazilian Portuguese <> English in my case) was excellent.
The translation took less than a second. I have a fast internet connection. The one thing that disappointed me is that I could not use just one earbud to just listen to a Brazilian conversation. I figured out that I can connect both earbuds and use any of the three modes but not give the guest device to anyone. A little clumsy. It would be great if a "just listen" mode could be selected to translate foreign conversation. For two people talking it works very well.
Just a mention of charging the earbuds fully before using would be helpful. Also, no charger was included, so I assumed (correctly) that I could my Cell phone charger, or plug it into the USB port of my computer. The only info, in the user manual, about charging, was what the flashing lights meant, as far as percent of charge.

I know this is a new product, so I am hoping these suggestions help make the product batter.
Overall a great product! I will be using it to have conversations with my Brazilian relatives over Christmas.

As a native Korean speaker I wish I had this easy to use language translator since I first moved to the states in the 70s. While I speak English, I still have an accent and there are still things that may sometimes be difficult to explain in a way that’s understandable.
I especially love using this with my daughter, who speaks more Spanish than Korean. She’s able to speak to me and I understand her feelings more.
I even recommended this product to my friend who has a hard time with English. This translator will help her greatly when she needs to see her doctor.

The translator is helpful, just being honest. My parent doesn't speak the language my wife does, and that can be a pain sometimes. This translator works as a mediator between them. I really appreciate it. Bug happened, but only very few times. I believe it should be fixed by software update. Creative design on the case, and well packed. I like it.

WT2 REALLY works as advertised!
Device & Performance -- I have been using it for a few days now with English, Chinese (Cantonese) and French, and it REALLY REALLY works! Now with the most recent update it has a new "simultaneous" mode. . I have found it works VERY well when you speak (i) slowly (ii) clearly (iii) avoid proper nouns (iv) without the 2 earphones too close, and (v) without much background noise^ ! I have found that following this advice, it dramatically reduces the frequency of WT2 Plus misundertanding what I say (it presents the original language in text on screen so you confirm WHAT is being translated -- very smart). I must say, when WT2 accurately recognizes your input (accurate speach to text) then the translation seems very accurate! (The translation is also shown in text on the screen). Thus the most important thing is getting the speech input (to text) correct.
Overall... I must commend Timekettle forthey technology. they have accomplished thus far. I look forward to seeing continued improvements (especially in the speech input)!

K
WT2 Plus AI Realtime Translator Earbuds Krista
Stop thinking about it and just buy them!

I am blown away by all aspects of this product. I am the Plant Manager for a highly diversified manufacturing facility. This product has broken down all communication barriers between employees and myself. I no longer have to find someone to translate, nor do I have to plan different meeting sessions based on peoples primary languages. The entire unit easily fits in my pocket so I am able to carry it while walking the production floor for easy access when needing to communicate with someone. Most importantly this product has eliminated intimidation to talk to me due to language barriers. They know they can just flag me down and I’ll hand them an ear bud, then we start talking in seconds!

A
WT2 Plus AI Realtime Translator Earbuds Amazon Customer
I highly recommend these!!!!

I am super happy with these translator earbuds. I need them for two languages due to a girlfriend who speaks Portuguese and family members who only speak Polish. My girlfriend also uses them when she does not know the word in English.

This product is amazing. The quality of sound is really good.the translation is pretty accurate. 10/10 recommended!!!!!