Have you wondered why most aliens depicted in Sci-Fi films and TV series just happen to conveniently speak English? It’s sometimes a strange coincidence, sometimes conveniently baked into the plotline, and sometimes, it’s this fictional product called a universal translator. Universal translators have appeared in pop-cult series like Dr. Who, Star Trek, the Hitchhiker’s Guide to the Galaxy, and they form the bedrock for the Timekettle WT2 Edge, a pair of in-ear ‘translator-buds’ that can perform bi-directional translation in as many as 40 languages.

While the Timekettle WT2 Edge doesn’t work with languages from alien civilizations as shown in most sci-fi depictions, it does its job of actively and instantly translating Earth-based languages rather well. Running on as many as 15 serves worldwide, the earphones provide you with real-time low-latency translation of 40 languages and 93 accents with an industry-leading 95% accuracy. 7 of the world’s most spoken languages are even stored offline on the WT2 Edge, offering translation even without an internet connection. All this is only possible because the WT2 Edge builds on the successes of technological innovations before it. The earphones are powered by 6 leading translation engines (DeepL, Google, Microsoft, iFlytek, AmiVoice, and Hoya) along with Timekettle’s own translation engine to provide translations between both languages and accents. Just pop these in-ear translators in and they can be used in 3 different modes. A “Simul Mode” lets you share one earpiece with the person you’re talking to, and both earphones work as individual translators, actively translating both input and output in realtime to ensure you have a seamless conversation. For shorter conversations, the “Speaker Mode” lets you turn your smartphone into a speaker. Just say what you want into the earpieces and the phone plays it back for the opposite person in the translated language. The phone can even display the text back in both languages, working well in noisy environments like bars and restaurants where you want to quickly communicate with someone but you don’t speak the local language. The third “Touch Mode” facilitates cross-cultural conversations, and gives you the ability to touch the earpiece to activate your mic (and mute the others), like a smart walkie-talkie that translates your speech in real-time for as many as 6 people. Beyond the “Touch Mode” function, the WT2 Edge can handle group chats of 30 people speaking thirty different languages at once, and the earphones translate everything. Pair this with Zoom and you could have a multi-lingual conference with your entire global team practically seamlessly, and with everyone on the same page.

Conversations and conference meetings can even instantly be recorded from within Timekettle’s app, and can even be instantly converted to text, letting you capture and share transcripts of discussions. On the inside, there’s a lot behind what makes the WT2 Edge work as seamlessly as it does. Dual-beamforming microphones help capture your voice clearly, while advanced vector noise-canceling algorithms isolate any excess sound, letting you have clear conversations even on busy streets by filtering out background noises. Its powerful data-handling capacity means translations are provided instantly, with ultra-low latency of 0.5 milliseconds – something that the WT2 Edge in-ear translators are specifically built to do, and that regular TWS earphones like the Google Pixel buds can’t handle. Given their unique function, the earphones are designed to provide up to 3 continuous hours of active translation. Along with their charging case, that gets bumped up to 12 hours, making them the ultimate universal translator for everything from foreign holidays (whenever those become normal again) to meetings with global teams. Muy bueno, eh?! 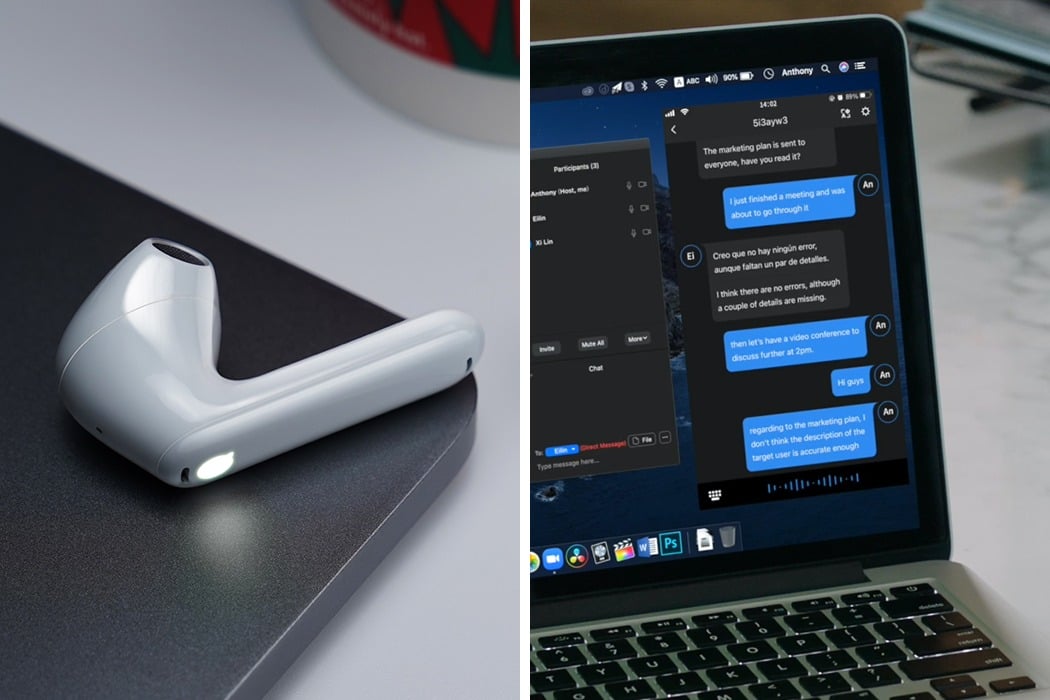 The WT2 Edge is the world’s first truly bi-directional simultaneous translation earbuds, translating in real-time as you speak and listen, and delivering what you said to your listener’s ear in as little as 0.5 seconds. With up to 95% accuracy in 40 languages and 93 accents, they’re the ultimate tool for breaking the language barrier. 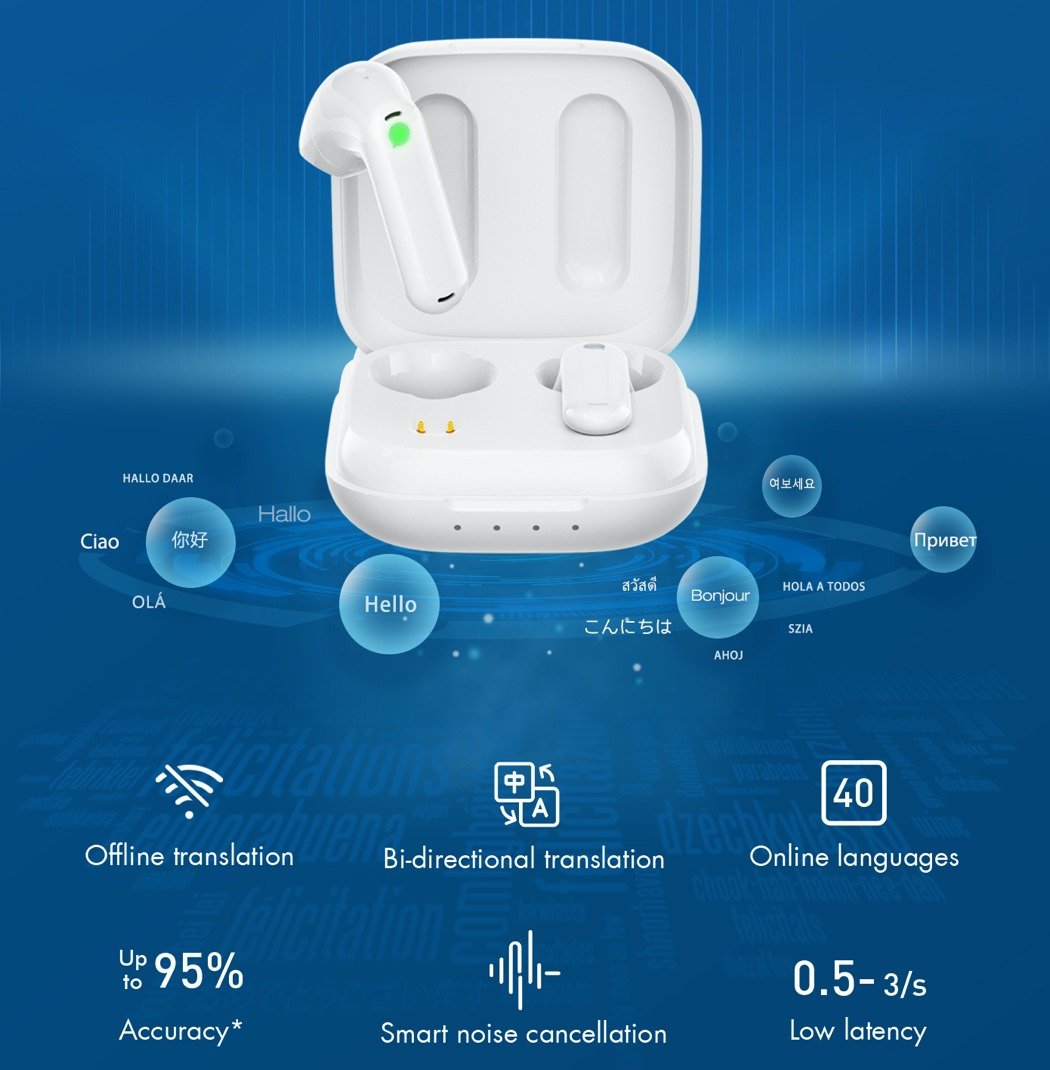 With WT2 Edge you can speak and hear other people’s translations at the same time – the way conversations were meant to be. No more awkward pauses to wait for your long-winded partner to finish. So your conversations flow naturally, from ear to ear.

The WT2 Edge earbuds know your voice is unique. That’s why they use dual beamforming microphones and directional voice recognition to focus on the sound of your voice, separating it from other voices nearby. So you’ll never mince words with whoever’s sitting next to you. 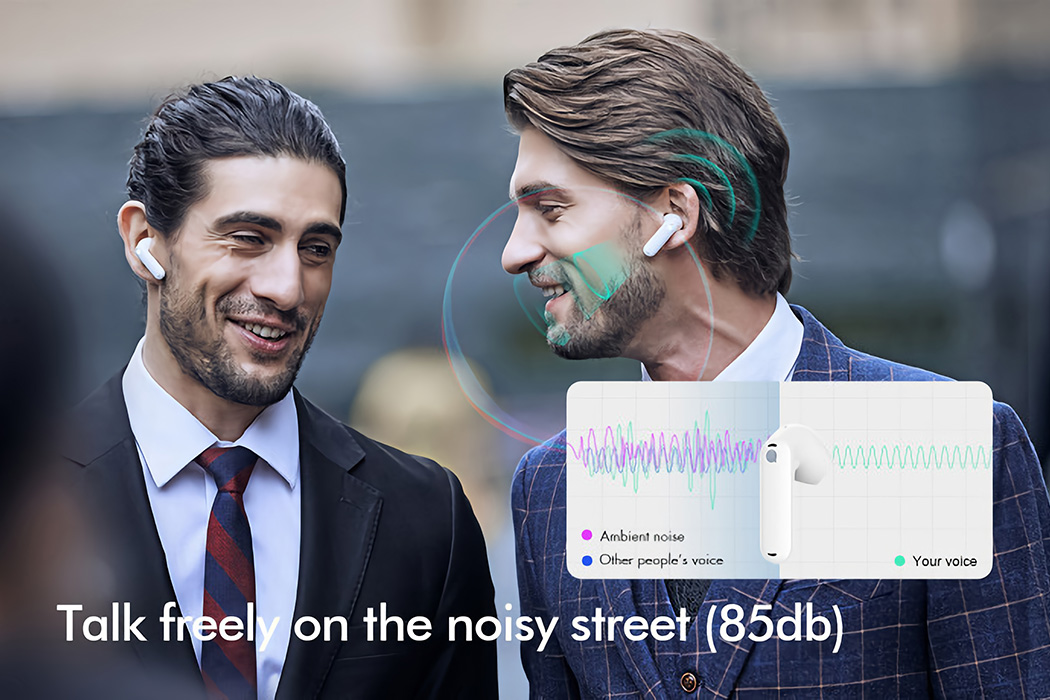 And to make translations even more accurate, the Edge earbuds use smart noise-reduction to filter out distracting background noises. Making sure your message isn’t muddied by motorcycle traffic and tapping pens. So when you do take the floor to speak your mind, your message comes across loud and clear.

Powered by the world’s 6 leading translation engines (DeepL, Google, Microsoft, iFlytek, AmiVoice, Hoya) and Timekettle its own, the Edge earbuds deliver faster and more accurate translations to your meetings and conversations. Delivering up to 95 percent accuracy in some languages. 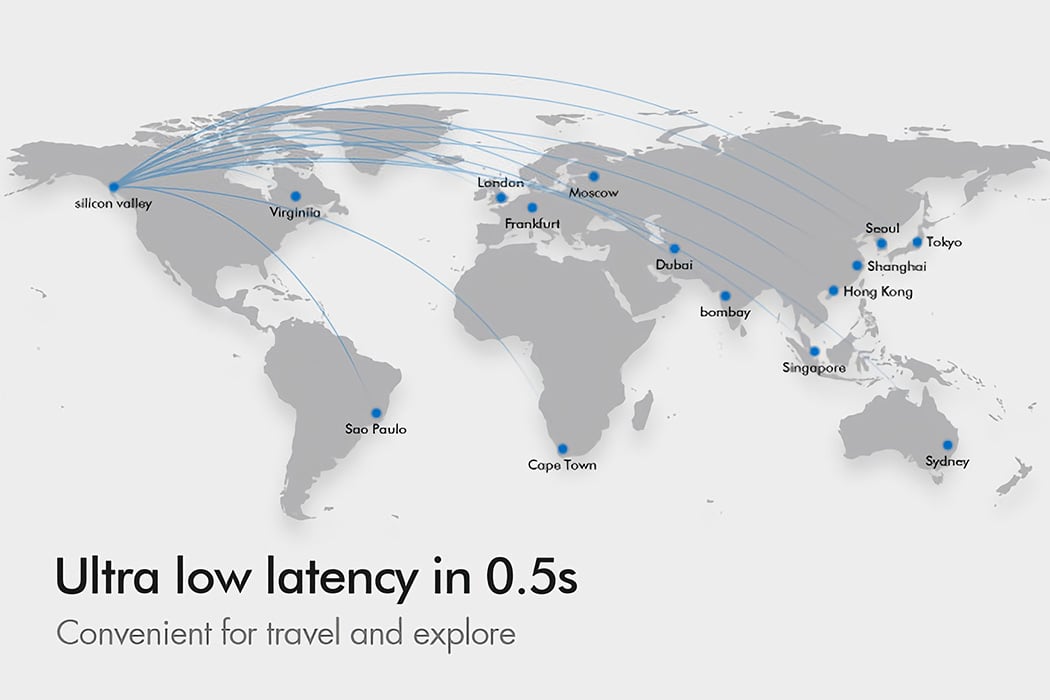 WT2 Edge uses 15 servers worldwide to deliver you the fastest translations possible, no matter where you are. The Edge can deliver simultaneous, bi-directional translations in as little as 0.5 to 3 seconds. Bringing you professional-level translations to help your board meetings and client sit-downs go smoothly.

Simul Mode –  Helps you connect one on one for effortless face-to-face communication. Just share one of your WT2 Edge earbuds with your partner, and both of your words will be translated in real-time for natural, bi-directional communication without an interpreter.

Touch Mode – You don’t need to talk over each other in a multi-person meeting. Simply tap your earbud when you have something to say and you’re in control of the conversation. Other mics are muted when it’s your turn to speak, and your message will be translated and delivered to everyone listening. When you’re finished speaking and ready to listen, just tap the earbud again to let someone else have their say. It’s the perfect moderator for your cross-cultural conferences.

Speaker Mode – While you’re wearing an earbud, simply say what you need to say. The Edge will then translate and deliver your message through your phone’s speaker, so anyone in earshot can hear it. Or if you prefer to keep the volume down, the Edge app also displays your translation in both languages on the phone screen. It even powers Text-to-Speech to read your typed messages out loud. Now you can go about your day without getting lost in translation. 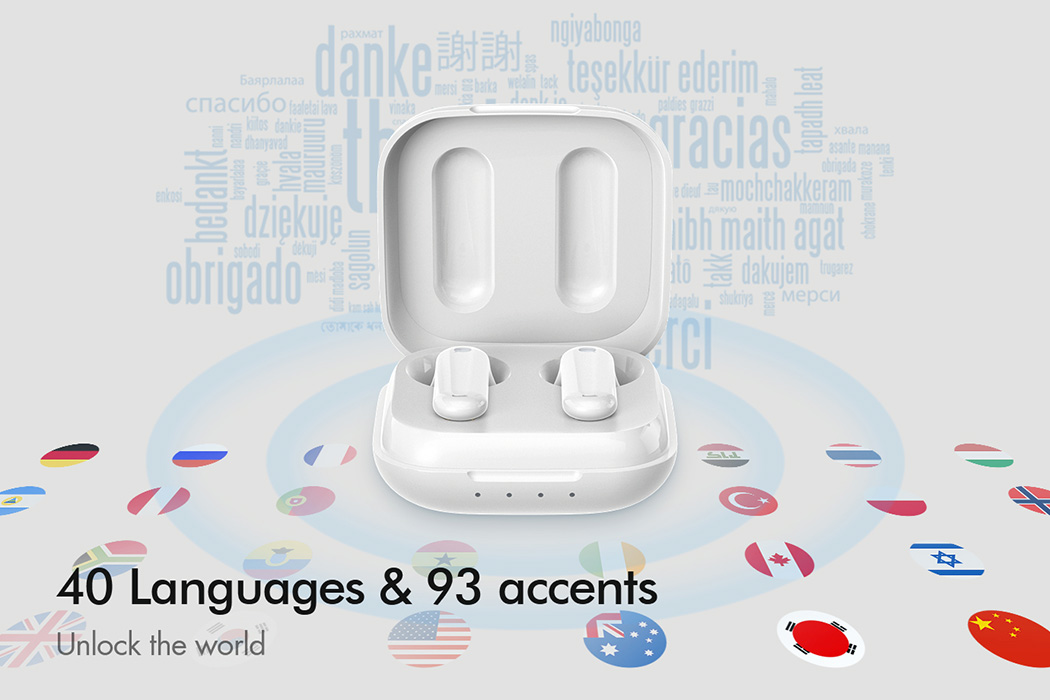 The WT2 Edge earbuds support 40 languages and 93 dialects. So no matter where you go, you can put your best foot forward knowing there’s no situation or conversation you can’t handle. 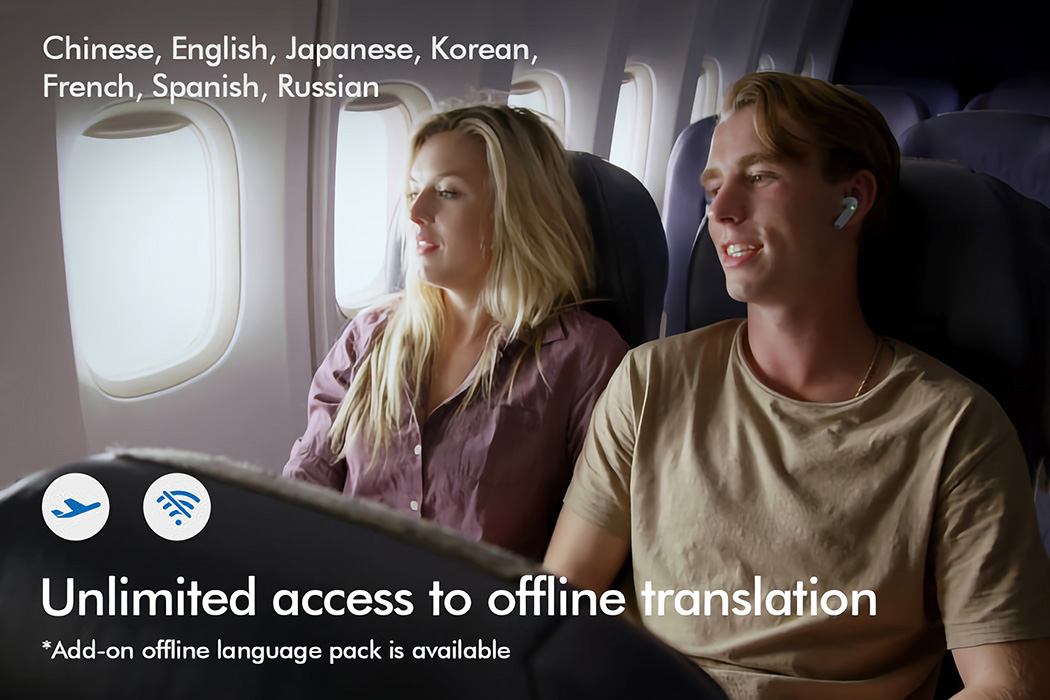 The Edge comes with seven languages and counting, available for offline access. So whether you’re sipping tea with your suppliers in South China or exploring a winery with your partners in Tuscany, the WT2 Edge is there to help get your order right.

The Edge’s Group Chat supports up to thirty people speaking thirty different languages at once, making it ideal for Zoom calls and remote meetings, even when your business spans the globe. You can use Zoom at the same time to have a truly international business meeting.

Group Chat even supports both voice-to-text and text-to-text recording through the Edge’s app. So you can leave the meeting minutes for us. They’ll be automatically saved to the cloud in your desired language, ready for you to download, copy, and share. 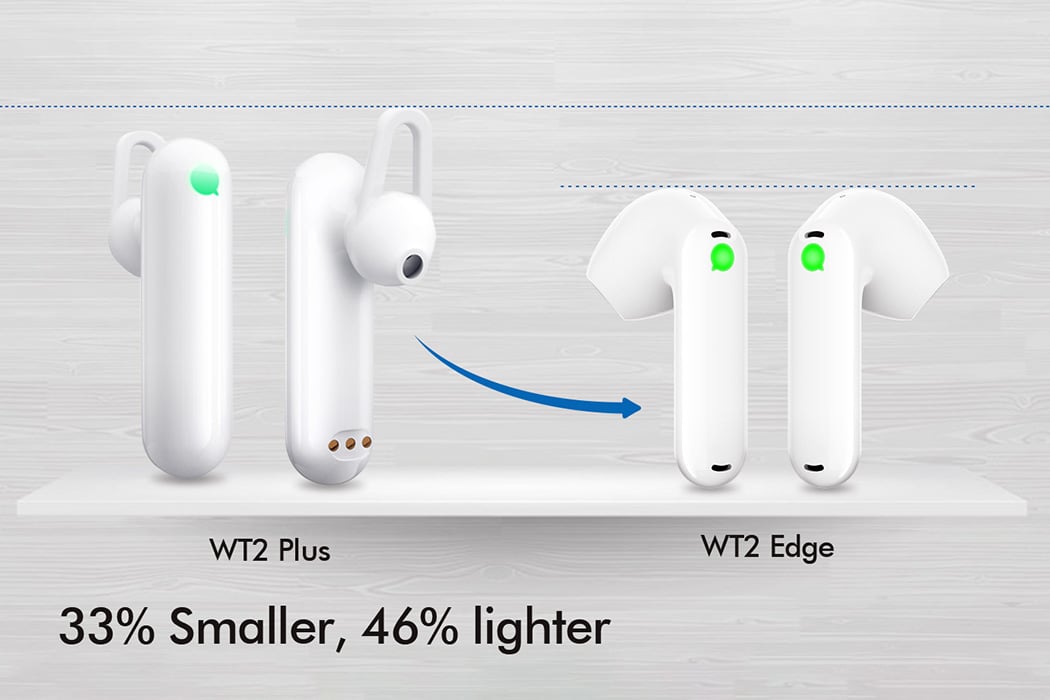 The Edge earbuds are 46% lighter than our last-gen translating earbuds and 33% smaller. Plus they weigh in at a sleek 5.4 grams each, so you won’t even notice them in your ear while you’re in and out of meetings all day or out exploring the city. 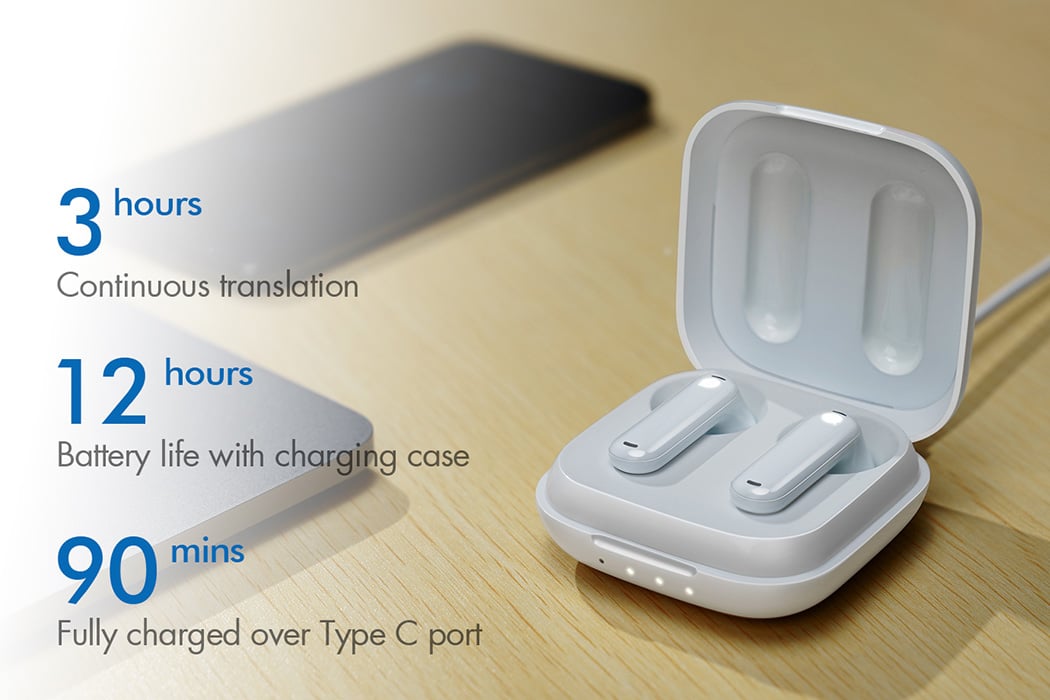 WT2 Edge gives you three hours of nonstop translating time on a single charge and a full 12 hours with the portable charging case. Meaning you’ll often have enough battery to power a full week of work or a short trip abroad on a single charge. 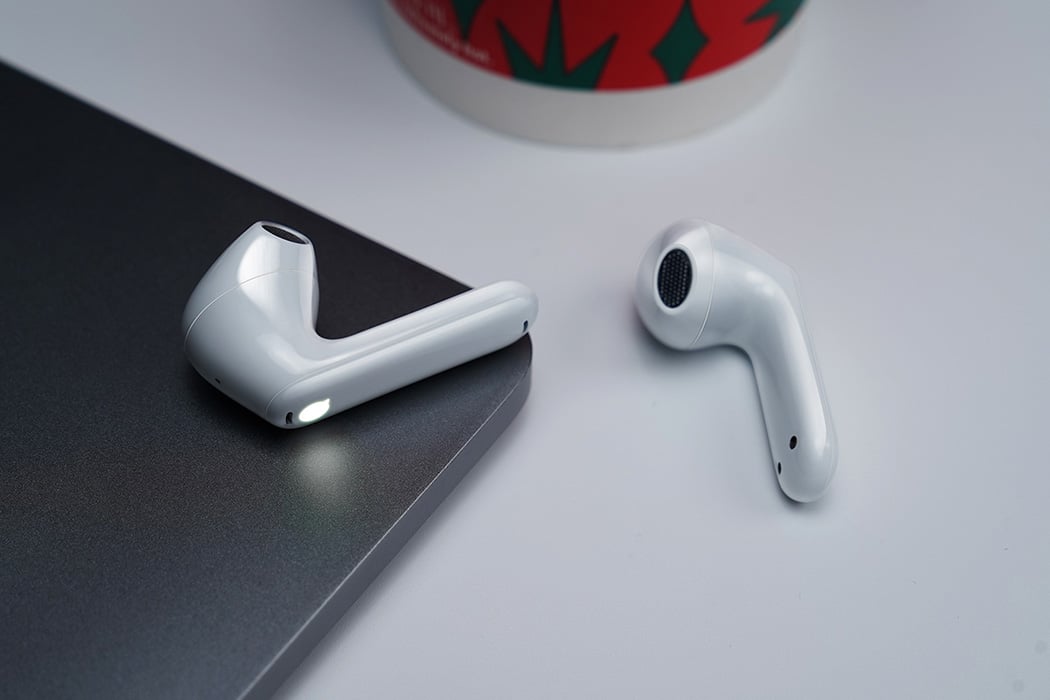